Venugopalan Pallayil, or Venu as he is popularly known among his friends, has a post graduate degree in physics and a Ph.D in Microwave Electronics both from Cochin University of Science and Technology, India. He had been a reciepient of many research fellowships from reputed Indian Scientific Organisations such as ISRO, CSIR and DAE during the period of his PhD work. In 1986 he was selected for a 1 year Electronics Fellowship Course by the Government of India and after the successful completion of the course was posted as a Scientist in Naval Physical and Oceanographic Laboratory (NPOL), Cochin, India. In NPOL he worked as an R&D Scientist contributing to the Indian Defence Research & Development with major contributions in the field of air-borne ASW systems. In 1998 he joined Acoustic Research Laboratory as a Research Fellow and currently is a Senior Research Fellow.

He has been responsible for the successful completion of many projects in ARL, namely Ambient Noise Imaging (ROMANIS), Time Reversal Mirror and Digital Thin Line Towed Arrays. The project ROMANIS won the prestigious Defence Technology Prize in 2004 for the best Group Project. Currently he is leading the research activities on the development of light weight towed arrays, including fiber optic arrays, for underwater applications using AUV and USV platforms. He has several publications to his credit. Venuhas been part of three international acoustic experiments in collaboration with US institutions. In 2001 he participated in the South China Experiment and in 2013 he was invited to participate in the Target and Reverberation Experiment (TREx) off Florida, Panama City Beach. In 2017 he also participated on invitation in the Seabed Characterisation Experiment at the New England Mud Patch in collaboration with Woods Hole Oceanography Institute.

Apart from research activities, he also supports the lab as a Deputy Head, helping out the head of the lab on many fronts such as HR and finance management. He has also served as the Manager for Operations for the Tropical Marine Science Institute until April 2014. In this capacity he helped out the Director of the Institute on the admnistrative matters including Finance.

Venu is a Senior Member of IEEE, member of Acoustical Society of America and Society of Acoustics (Singapore). He is an elected member of the Administrative Committee for IEEE OES, USA. He has served the local IEEE Oceanographic Engineering Society in various capacities such as Chair, Vice-Chair and Treasurer. He was the Chair for Finance for the IEEE OCEANS 2006 Conference and also as Chair for Exhibits for the WESPAC 2015 conference held in Singapore. He served as the co-Chair and Chair for the Singapore AUV Challenge 2013 and 2014 respectively and continue to serve as its chair for sponsorship since 2013. He served on the OTC Asia Conference as a OES Programme Committee member in 2014, Co-Chair in 2016 and as Chair in 2018. He won the IEEE OES Presidents award in 2018 for his exemplary services to the Society. He is busy on week ends cooking Kerala dishes at home and enjoy sports. 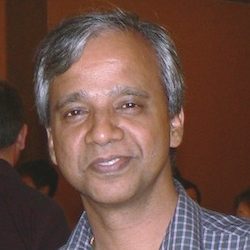