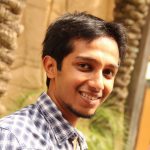 The Arctic is one of the focal points of global climate change, with surface temperatures rising twice as fast as the rest of the world. A significant component of the global sea-level rise is attributed to melting glaciers and ice-caps such as those found in Svalbard. Passive acoustic monitoring techniques are suitable for extracting information on the climate-change related mechanisms in these glacial bays, because sound data is simple to acquire, covers a large area, and can facilitate long-term monitoring. We have been exploring how acoustic monitoring can be used to characterize the glacier-ocean interface, in collaboration with researchers from the Scripps Institution of Oceanography and the Institute of Geophysics, Polish Academy of Sciences.

In polar regions, a large component of the ice loss that feeds sea level rise occurs due to two mechanisms- calving and submarine melting at the glacier-ocean interface. The underwater melting of glacier ice by sea water produces a sound similar to ‘frying bacon’ due to explosion of bubbles underwater. This sound travels over long distances underwater. Thus, it is a promising medium to characterize ice-loss in large areas using relatively cheap recording equipment over longer periods than visual systems, and with more resolution than conventional methods such as satellite imagery. Acoustic recordings from sensor arrays deployed in the Arctic will allow us to develop a deeper understanding of the submarine melting process and the underwater environments in these regions.

We are working on developing signal processing techniques to estimate the glacier melt rate from data recorded in these regions. These will guide our strategy to build acoustic systems to monitor the ice-loss over a long period. Such long-term acoustic-based estimates of ice-loss and its components can help improve predictions of sea-level rise, which pose an increasing risk to coastal states like Singapore.